Stone Taylor Weeks, 24, and William Holt Weeks, 20, researchers at Rice University's James A. Baker Institute for Public Policy in Houston, Texas, were killed on July 23, 2009 by a highway trucking crash while they were stopped in a traffic jam on Interstate 81 in Shenandoah County, Virginia. The Weeks brothers were en route to Washington to visit their parents and friends and to attend a book party honoring “The Wilderness Warrior: Theodore Roosevelt and the Crusade for America” by the historian Douglas Brinkley. Stone was Brinkley's research assistant for the book and other projects.

Stone was born in Savannah, Georgia. Holt was born in Little Rock, Arkansas. The boys grew up in North Bethesda and were super-active members of St. Columba's Church in Washington. They were best and inseparable friends.

Stone attended Wyngate Elementary and St. Andrew's Episcopal School. He graduated from The University of Delaware in 2007 with a degree in history. Immediately after graduation, he was hired to be the assistant and researcher for Brinkley, a Rice University professor of history and a fellow at the James A. Baker III Institute for Public Policy. After two years of working together on the Roosevelt book, Brinkley wrote this about Stone in the book's Acknowledgments. "I was deeply impressed by his intellect, drive, and computer skills ... During the manuscript preparation phase he was exemplary. He became like family. The world can expect great things from him in the coming decades."

Holt went to Farmland Elementary, Tilden Middle and Walter Johnson High School. He spent his first two years of college at Eckerd College in St. Petersburg, Florida, where he focused on history, studied history and political systems in London for a semester, and played varsity tennis. As a sophomore he was chosen by his teammates to receive the Triton spirit award. In the summer of 2009, Holt transferred to Rice University to be near Stone and to be a research assistant -- for the second summer in a row -- to Christopher Bronk, Baker Institute fellow in technology, society and public policy. A graduate-level course on environmental technology and sustainability was created based on Holt's research from his first summer's work. At the urging of Bronk and several others at Rice, Holt applied for a transfer to Rice from Eckerd. He would have been a junior there in the autumn of 2009.

Both were Honor Roll and Dean's List guys. For a year they attended an international school in Aix-en-Provence, France, while their mother, Jan Taylor Weeks, taught at the Marchutz School of Painting and Drawing.

In high school, Stone played varsity tennis and basketball and as a senior was named Captain and Most Valuable Player of his basketball team. He was on the St. Andrew's vestry and an enthusiastic leader in a vast range of community service projects, including a Muscular Dystrophy Association camp in Chicago and a Habitat for Humanity program in Tennessee. He was always active in student government and he was both the news editor and the editorial editor of the school newspaper. At St. Columba's he was an acolyte and involved in the STEP program.

At Delaware, Stone was a university teaching assistant for history and a founding father of the UD chapter of Pi Kappa Phi fraternity. He worked with Professor Guy Alchon to organize a statewide forum titled “Soldiers to Veterans: The Burdens of Conscience and a Careless Public.” He assisted in the making of a documentary on the My Lai massacre. Two summers were spent working at Thompson O'Donnell law firm in Washington and the summer before his senior year he was intern to the director of the ACLU in Delaware.

Holt was an avid basketball player until his junior year at Walter Johnson, when he decided to turn his athletic prowess to his other love, tennis. He played four years of varsity tennis and as a senior became their number one player, Captain, and Most Valuable Player. He was involved in student government and was a school representative to the Mongomery County SGA Conference. As a junior in the school's Leadership Class, he helped create a fundraising project -- now a national award-winning tradition -- that benefits the Leukemia & Lymphoma Society, and as a senior intern he led the school's blood drive. Holt was voted Best Personality by his senior class. He was an acolyte and a member of the boys' choir at St. Columba's, he was youth representative to the Stewardship committee and the Rebuilding Together DC committee, and he was deeply involved in other charity building projects, including Habitat for Humanity International and the St. Columba's Appalachia Project. He also was involved in the STEP program.

Stone and Holt both loved Nature and they marveled at this coolest of moments: Stone was working on the history of the American environmental movement and Holt was working on its future.

In Houston, Stone and Holt were together constantly. They reveled in each other's company – sharing friends, food and fun. Each was a remarkable blend of sensitivity, intellect, and astonishing sense of humor. They both loved a party. The brothers played basketball and racquetball together. They sang karaoke, loved sushi and adored Stone's dog Priam. They were passionate about history and politics and had such original minds. On Sundays they served food to the homeless.

They are survived by their loving parents, Linton Weeks, former staff writer for The Washington Post and National Correspondent for NPR Digital News and Jan Taylor Weeks, former Washington artist, teacher of art through The  Washington Accueil at The French Embassy, and Artist-in-Residence at The Marchutz School in Aix-en-Provence, France. They are also survived by countless loving family members and friends. 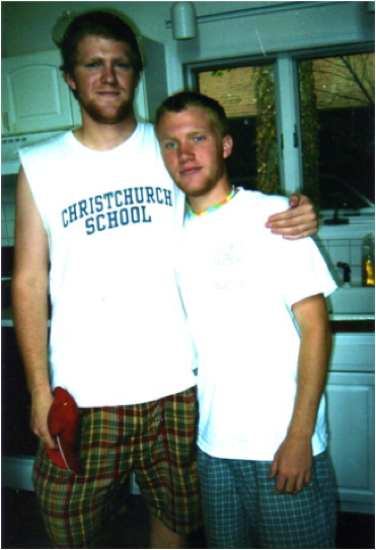